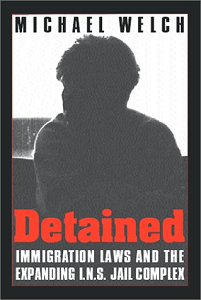 In 1996, Congress passed expansive laws to control illegal immigration, imposing mandatory detention and deportation for even minor violations. Critics argued that such legislation violated civil liberties and human rights; correspondingly, in 2001, the Supreme Court ruled that many facets of the 1996 statutes were unconstitutional. Michael Welch shows how what he calls "moral panic" led to the passage of the 1996 laws and the adverse effects they have had on the Immigration and Naturalization Service, producing a booming detainee population and an array of human rights violations. "Detained: Immigration Laws and the Expanding I.N.S. Jail Complex" offers sensible recommendations for reform along with an enlightened understanding of immigration. In an epilogue, Welch examines closely the government's campaign to fight terrorism at home, especially the use of racial profiling, mass detention, and secret evidence. Recently, the INS, particularly its enforcement and detention operations have expanded dramatically. This book will offer many readers their first look inside that system. It will be an invaluable guide to thinking through whether the system is fit to take on the additional responsibilities being asked of it in the post-September 11th world.